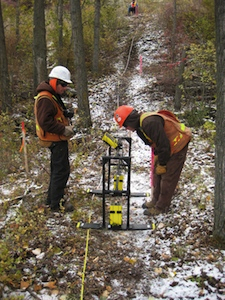 The concept of using radio waves to probe the subsurface is not new and the GPR method evolved from research projects conducted in the Arctic and Antarctic during the late 1950’s where Radio Echo Sounding (RES) techniques were used to determine the depth of ice sheets and glaciers (Bogordsky et al. 1969).

The use of radar to provide subsurface ground information began in earnest in the 1970’s as research activity associated with the Apollo 17 Lunar sounder experiments led to many articles being written on theory and feasibility of the GPR technique. The first practical applications of GPR focused on permafrost soil applications (Annan and Davis 1976) and, as the knowledge base for the strengths and weakness’ of GPR became better understood, so did the diversity of the ground conditions and applications for where it was used (Ulriksen 1982).

Today, ground penetrating radar is one of the more commonly used geophysical devices for obtaining shallow ground information. Compared with other methods, GPR data is relatively quick and inexpensive to obtain and results provide location and depth information for detected/interpreted subsurface features. GPR has the highest resolution of any geophysical method for imaging the subsurface, with centimetre scale resolution sometimes possible.

For more information on GPR please visit our equipment supplier page at: